St Martin’s church originated with a family who lived at Brabyns Hall in Marple Bridge. This, a farm-house which had grown into a gentleman’s residence in its own park-land, passed in 1866 by inheritance to a distant relative of its previous owners: Mrs Ann Hudson, who then lived in Pau in south-west France. In her seventies, she came to live at Brabyns, accompanied by her unmarried daughter Maria Ann (in her late forties) and a teenage grand-daughter, Fanny Marian. It was reported that ‘immediately on taking up their residence at Brabyns Hall’, the family set up ‘a small wooden chapel, zinc-cased’. The first service was held there on 6 October 1867, and preparations were made for a more permanent church. Mrs Hudson gave a site, a slice of her park-land; and her daughter Maria Ann provided the money for a building. A foundation stone was laid by Mrs Hudson (armed with a ‘a beautiful silver trowel, with ivory handle’) on 9 October 1869, at a special service, at which ‘a few hundreds of people were present, who maintained complete silence and order during the time the service was being chanted’. The building of the new church went ahead.

The Hudsons built their own church because they were followers of the ‘Oxford Movement’ which was a powerful influence in the Church of England from the 1830s onwards. Marple already had a church, All Saints, which was one of three chapels (Marple, Disley, Chadkirk) within the large parish of Stockport. The local millowner, Samuel Oldknow, rebuilt this church in 1811. Worship here followed the customary style of most of the Church of England, and evidently the Hudsons wanted something more in tune with their ‘High Church’ sympathies. They must have obtained the support of the Bishop of Chester, William Jacobson. He had been Regius Professor of Divinity at Oxford, 1848-65, but had kept clear of the Oxford Movement. However, as a bishop he endeavoured to keep an orderly balance between the different parties in the Church. Once St Martin’s was established, he split Marple into two new parishes, centred on All Saints and St Martin’s.

St Martin’s was consecrated on Friday 11 November 1870. On the previous evening, Maria Ann Hudson, who took the lead in creating the church, and was known as ‘The Foundress’, paid a visit to the new church, ‘quite late to see to some last matters’. The new heating apparatus was under the church, accessed half-way along the nave by a flight of steps covered by a grid. Someone had left the grid open, and Maria Ann ‘troubled not to take a light, with the result that she stepped into the cavity’, and suffered a ‘headlong fall’. She incurred ‘nothing worse than a real shake and a dislocated finger’, and was undaunted. ‘It was just “her way,” and she always came up pluckily and thought no more of it. Probably no one knew anything of it till after the next day.’ 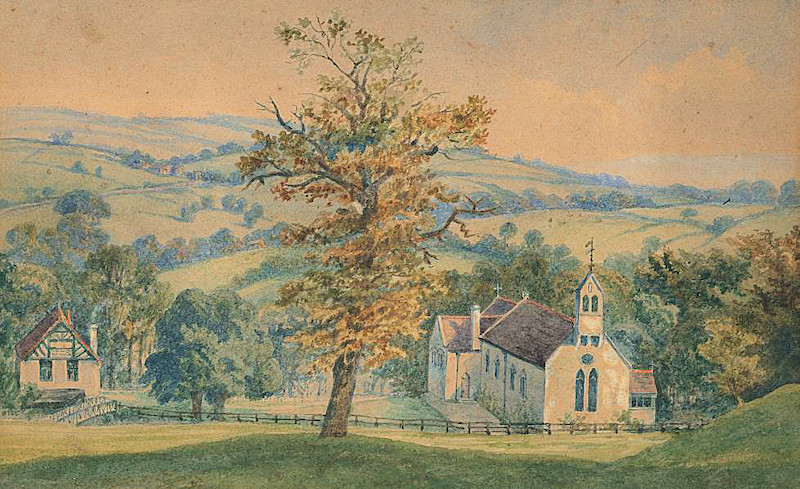 On consecration day, the feast of St Martin, ceremonies began with a Holy Communion service at 8 a.m. in the old ‘tin church’, which was situated in what is now the car park behind the Parish Hall, and was later the school playground. This service was taken by the Rev Edward Hayes, ‘incumbent designate’ of St Martin’s. He had been a curate at the significant London Anglo-Catholic church, St Mary Magdalene, Paddington, and his former vicar there, the Rev. R. T. West (who assisted at this Communion service) was foremost among the clergy guests at the St Martin’s ceremonies.

The main service at 11 a.m. also began in the tin church: the bishop and other clergy robed here (‘in their cassocks, surplices and hoods’ – Eucharistic vestments would have been far too controversial at this time), and then processed across the main site to the new church. (This site had been traversed by a footpath, the ‘Seven Stiles’ path from Rose Hill to Marple Bridge, a right of way which had to be re-routed before the new church could be built.) During the procession, the choir of twenty choristers sang the hymn ‘Christ is the foundation of the house we raise’, which ‘was vigorously taken up by the crowded congregation’ in the new building. This hymn, by the prolific hymn-writer J. S. B. Monsell, though still included in some hymn books, has never achieved a position in the mainstream of hymnology. The procession was led by ‘some officials bearing a cross’, while others carried ‘a beautiful painted banner of St. Martinus … represented on horseback dividing with a sword his cloak, to give part thereof to a poor, venerable, half-naked looking mendicant’. ‘The deed of consecration was then read by the Bishop’s secretary’, followed by sung Morning Prayer and a second celebration of Holy Communion, conducted by the bishop. The bishop preached a bracing sermon, urging that Christians must not take refuge in the tabernacles they created, but must go out into the sinful world to spread the faith. The service concluded with the still well-known hymn ‘Blessed City, Heavenly Salem’ (J. M. Neale’s translation of a 7th century Latin hymn), and the consecration of the grave-yard then took place.

Toasts were drunk. Replying to the first, the bishop commented that the new church of St Martin’s was ‘about the 40th or 41st that he had consecrated since he became bishop of the diocese’ – he had arrived only in July 1865 – ‘and there were several others on the point of being ready for consecration’. The Rev R. T. West (of Paddington) disclosed that ‘Mrs. and Miss Hudson had built a church at Pau, in France, at which he was the first to preach; he was also the first to preach in the tin church close by, from which he was proud to see had resulted something better, … the new church’.

At 8 p.m. there was a service of Litany and Evening Prayer. The preacher was the Rev R. T. West, who took as his text ‘The zeal of thine house hath eaten me up’. Not only did West come up from Paddington, but he brought with him his organist, Richard Redhead, who presided at the organ throughout the day. The evening service concluded with the hymn ‘Holy offerings, rich and rare’. The words were again by J. S. B. Monsell, and they had been written for the opening of St Mary Magdalene, Paddington in 1867; Redhead composed the tune. It was noted that ‘the powers of the little organ’ in St Martin’s ‘were fully exhibited by Mr. Redhead, of London’.