The First World War memorial in St Martin's church is a bronze relief sculpture.  Installed in 1924, it was made by Henry Wilson, the architect of the two extensions to the original small St Martin's church: the Lady Chapel (1895) and the Christopher Chapel (1909).  Wilson was not only an architect but also a sculptor, goldsmith, teacher and journalist.  Wilson at first proposed as a war memorial a sort of shrine in the churchyard.  The bronze relief eventually installed in the south wall of the nave is unusual because it does not depict soldiers fighting or dying.  Wilson wished to give his war memorials a religious rather than military significance. This one shows a kneeling young man being received by Christ into a heaven thronged with angels and cherubs. 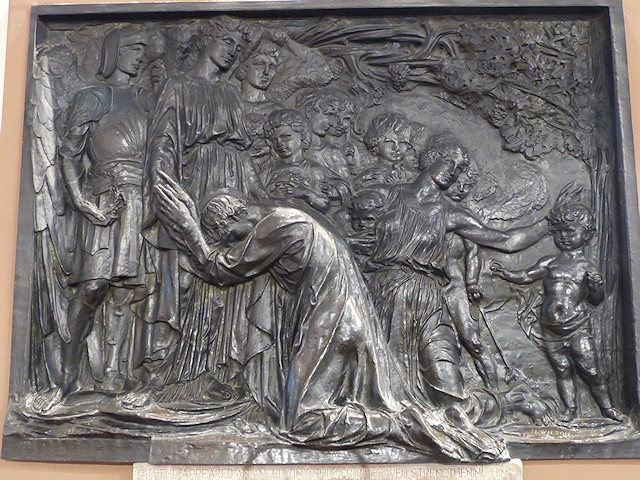 Below the relief is a stone table inscribed with the names of those of the Parish of Low Marple who fell during WWI:

Under that, there is a later tablet showing the names of those of the Parish who fell during WWII.

For more detailed information about Wilson's design and his other proposal for St Martin's Churchyard click Next.